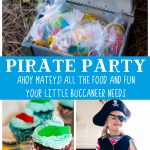 Hosting a pirate party for your little buccaneer is a super fun birthday party theme for kids. Find the easy pirate games, fun tropical party menu ideas, and tips for making the event fun for both the kids AND the adults.

The Peanut had her first birthday party with friends in our new home's backyard last weekend. Our birthday girl requested a pirate theme which presented just one small challenge: I know many of her sweet friends from school are not nearly as interested in pirates as she is. I had to carefully plan out the pirate birthday party to ensure everyone had a good time.

The best birthday parties for kids include:

I quickly learned from our recent Valentine's party that kids at parties are far more interested in playing & crafts than they are the food. All those fancy-dancy treats you see on Pinterest will go utterly to waste when it comes to kids age 6 and under.

Save your time and energy and use these simple pirate party ideas to keep the party snacks on theme.

Kids are very simple snackers. They want foods they recognize but absolutely love fun packaging. I decided to serve:

Serving trick: Stagger the cupcakes and cups of Goldfish crackers on a cupcake serving tier for a fun presentation.

If your kids are young enough, it is likely the other parents will want to hang out at the party rather than do a drop-off. While kids are absolutely content with goldfish and fruit, you might want to serve a few fancier treats for the adults to enjoy, too.

I decided to go with a tropical food theme for the adult goodies. This may have been selfishly motivated, I was so excited to have other grown-ups to enjoy some party treats with me that I know the kids won't touch!

All the treats can easily be made ahead of the party and just put out on serving trays minutes before everyone arrives. They are the perfect low-stress appetizers to share.

With the food all planned and out of the way, the next thing to prep ahead is a few simple pirate-themed party games for the kids to play. This is where we really had the most fun.

I stocked up on a few simple pirate-themed toys from Melissa & Doug and then turned them into super-easy games for the kids.

This was by far the kids' favorite game. I bought this pirate's treasure box and used all the little elements for different parts of the party.

I planned out 6 spots around our yard where the kids would find clues leading one clue to the next until they found the box. We handed them the first clue and then let them run.

TIP: Be sure to hide the box far away from where the rest of the clues are so they don't find it by accident. We put ours around the side of the house with most of the clues in the backyard.

I filled up our water table for the party and then dropped in all the plastic coins from the treasure chest set.

We "blindfolded" each player with a double-set of pirate eye patches and handed them a fishing net. They were each given a minute to try and catch as many coins with the net as they could.

Drop the coins back in the water before the next player. The one who catches the most coins wins.

Place a bunch of pirate costume pieces in a pile. Have the players sit in a circle around the clothing.

Each player rolls a pair of dice (or a single die depending on the age of the kids), when they roll the birthday pirate's age, they jump up from the circle and try to get dressed in all the pirate costume pieces.

Meanwhile, the players in the circle continue to pass and roll the dice. When a player rolls the birthday number again, the dresser in the middle has to stop, take off all the costume pieces, and hand them to the next dresser.

Whoever gets all the costume places on and shouts "ARR, Mateys!" first wins.