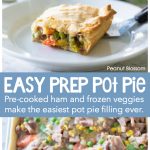 Nothing says comfort food like a ham pot pie. This delicious ham and veggie slab pie feeds a crowd and is the perfect make-ahead meal.

When we made our favorite pineapple mustard glazed spiral ham for Easter we were left with an enormous container of leftovers after the holiday was over.

I refused to let a single bite of that delicious ham go to waste. Since I had just recently perfected my pie crust making skills, I thought it would be fun to experiment with making a ham slab pie for dinner.

The problem in using my very favorite pot pie filling recipe is that it starts out hot but for this pie crust, you need the filling to be COLD, COLD, COLD.

That's when I realized, this makes one of the most perfect make-ahead recipes. In fact, you really need to prep it far in advance of baking so that the filling has a chance to cool down.

Let me break down all the steps for you so that you can enjoy this totally delicious recipe with your family soon.

How to prep ahead the best ham and veggie slab pie:

I've included the recipe at the bottom of the post, but you'll definitely want to reference the full instructions for the pie crust here to get all my tips and tricks.

Get the dough prepared and stick it in the fridge to chill.

Step 2: Prepare the ham and veggie filling for the pie

The most complicated step will be chopping the ham. Seriously.

Prepare the creamy ham filling. Then, pour the filling into a casserole dish for you to store in the fridge. It needs to cool down and get COLD.

Total time: 10 minutes, unless you're a slow ham chopper. Then maybe 15.

Step 3: Roll out the pie crust and assemble the slab pie

Divide the pie dough into two halves, one slightly larger than the other. The larger chunk will be the bottom crust.

Roll out the dough and place it into the pie pan. Smooth it into the corners and up the sides. Let the edges hang over the pan.

Roll out the second half to form the top crust.

Pour the COLD ham filling into the bottom pie crust. Top it with the second pie crust. Crimp the edges together and use a sharp paring knife to cut slits into the top for venting.

Return the pie to the fridge to chill until baking.

Now your pie is assembled and ready to bake! When dinner time comes, all you'll have to do is pop it in the oven.

I broke the early steps down into small breaks in my day. By dinner time, all the prep dishes had been washed and put away and we had the most amazing dinner ready to go. You could even prep the pie dough the day before if you wanted to make it even easier.

This pie crust recipe and the filling quantities were designed to fit perfectly in this baking pan.

You'll find that all the slab pies on this entire web site use that exact pan size. It makes the perfect flaky crust but if you really don't want another pan in your kitchen, a 9 x 13 dish would be the closest substitute.

To prepare the ham filling:

To bake the slab pie:

The dough can be made the day before but don't roll it out until the day you plan to bake it.

Keep everything as cold as possible for a light and flaky crust.