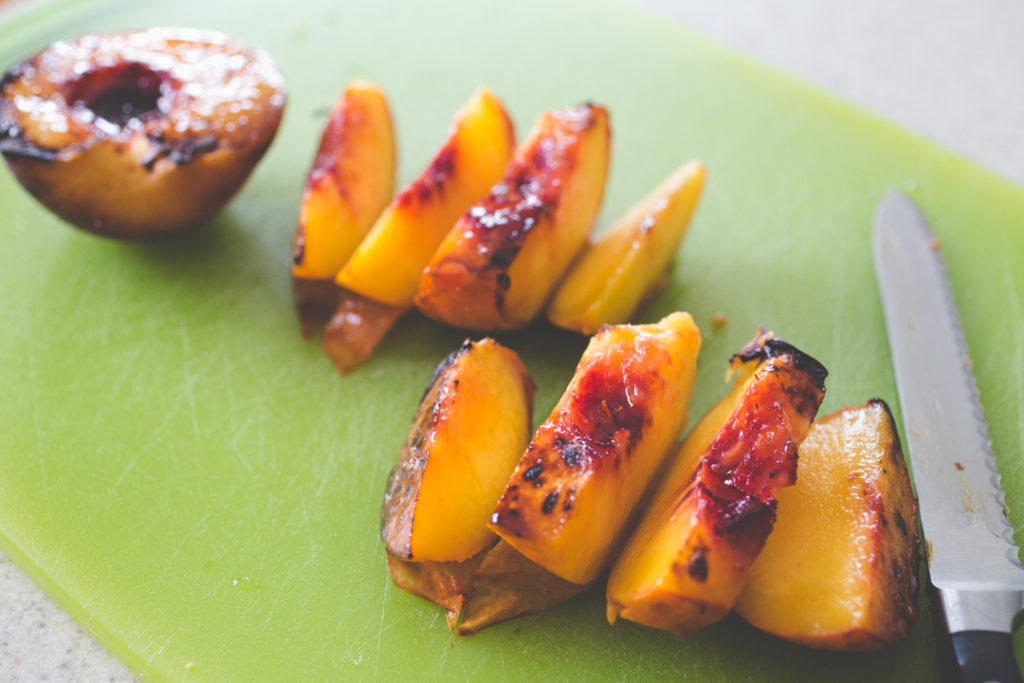 Are you tempted to lick your screen? I can't say I blame you.

Grilled peaches with brown sugar and butter. I could pretty much stop right there, right?? They kind of sell themselves, don't they. . . I have a MIND-BLOWING pork recipe coming to you later this week and it needed a stellar side dish. (The pork recipe is now live, you can find it here!) These peaches were so amazing, they deserved their own post and not just a footnote as part of the pork recipe.

I started with my favorite local peaches which are absolutely still in season here in the south. They were firm but ripe. I carefully sliced them in half and removed the pits.

Handyman Tim was working the grill for the pork and I didn't want to disturb him. I needed that pork as picture-perfect as possible. So I took the peaches to the oven broiler instead. It worked great. So choose your own adventure: Grill or Broiler. Either one works.

While the broiler preheated, I brushed a little butter just over the tops of the open peaches. Sprinkled them with a tiny bit of brown sugar: And then nearly had a heart attack when they went from melty to almost completely burned within moments: I caught them just in time. They didn't taste at all burned so don't panic if you have a bit more char than you expected. Just watch them closely because it turns FAST. I love how the tops remind me of my favorite creme brulee.

To the cutting board they went. Once they had cooled enough to touch, I sliced them into wedges. As an accompaniment to the pork dish coming soon, they were sheer perfection. We also enjoyed them on toasted crostini with a little goat cheese (still an obsession because of this recipe here.)

I could also see putting these over some vanilla ice cream or just straight up enjoying on their own. They were crazy easy to make, only took a few extra minutes on top of our dinner prep and were such a wonderful summertime treat.

P.S. Don't forget to check out the amazing rum glazed pork tenderloin that these peaches go so well with!

Line the peaches up on a broiler-safe pan. Brush with butter and sprinkle the brown sugar over the top. Broil for 3-4 minutes and then watch like a hawk so they don't burn.

Alternative prep: rather than broil them, you can grill them for a few minutes with the sugar side up.