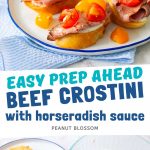 Easy beef crostini with horseradish cream and tomatoes is the perfect appetizer recipe for quick assembly before your party. Prep the elements in advance for a fast snack to serve your guests with a cocktail or glass of chilled wine.

Easy appetizers can be shockingly elegant. When the sum is greater than the parts, your friends will be thrilled with your delicious offerings.

You can serve them assembled as quick bites for your party or you can place the elements as a snack board on a charcuterie tray.

Start with a crispy, chewy homemade crostini made from a simple grocery store baguette or you could even buy the prebaked crostini in the bakery section at your market.

Top it with savory roast beef, juicy fresh tomatoes, and a slather of the easiest horseradish cream sauce ever.

Don't miss the delicious and easy variations for fun twists on this idea, too!

This is such an easy and simple recipe, you want to be sure that the ingredients you use are the best quality you can find.

Spread the crostini out in an assembly line.

Use a knife or spoon to spread a dollop of horseradish sauce evenly over the toast.

Layer a slice of roast beef over the toast. Depending on the size of your crostini, you may want to trim the roast beef slices in half or in quarters so there isn't an overwhelming amount of beef on each piece.

Chop the fresh tomatoes into large chunks and sprinkle them over each crostini.

If you want to make this ahead of time, I recommend prepping all the elements in advance but storing everything separately until just before serving.

The horseradish sauce, beef, and tomatoes will soften the crostini if they sit too long and it will lose that signature crispy crunch.

You can do these things up to 24 hours in advance:

Then simply assemble and serve.

If you prefer, you could serve the crostini, roast beef, horseradish sauce, and tomatoes separately on a charcuterie snack board and let your guests assemble their quick bites themselves.

You could also add:

For a little extra "something" fresh cracked peppercorns over the top would also be very delicious.

Once you've baked homemade crostini, it is so easy to prepare a few other crostini toppings to set out for your party alongside the roast beef crostini.

You could make a batch of peach blueberry salsa, my favorite strawberry bruschetta, or you could set out a platter of caprese salad and let guests add it to a plain crostini.

Prepare all the elements but store them separately until just before serving.

This homemade horseradish sauce recipe is easy to make.

Find instructions for homemade crostini here if you need.