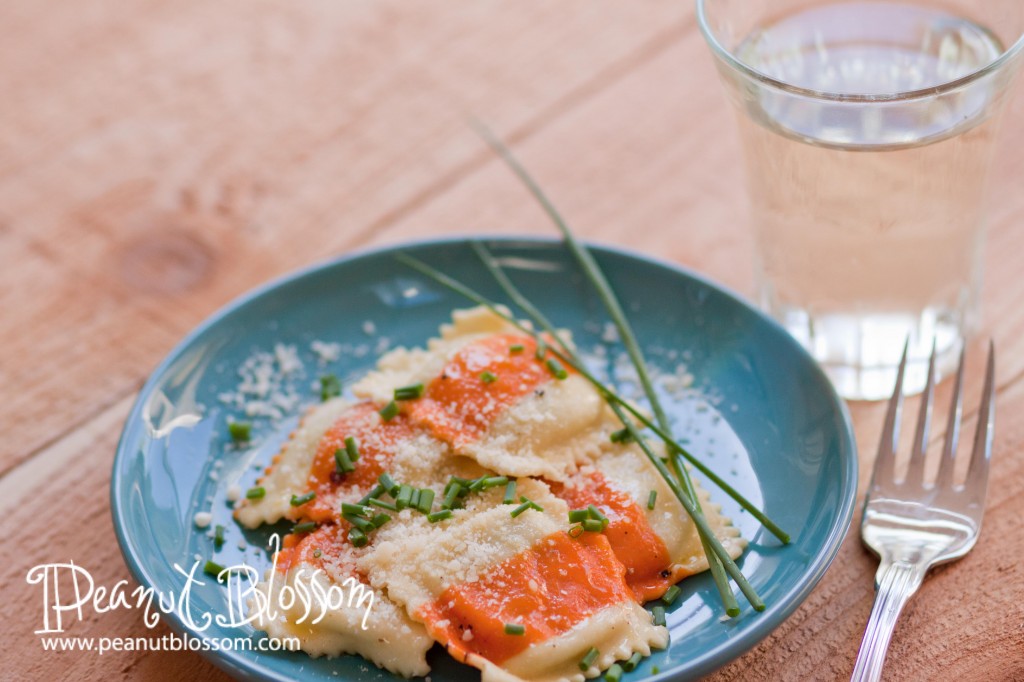 I've decided that of all the fresh herbs I'm growing in my garden, chives is by far my favorite. I've been sprinkling it on anything and everything for weeks. My love affair with this onion-y herb all started with an old Martha Stewart recipe. It has become a staple every summer since I tried it and I've tweaked it over time.

It is such an easy recipe, I never thought to even share it until a friend told me she didn't know what to do with the chives in her garden. It is essentially buttered noodles kicked up a notch, nothing more. But oh what  difference  a few extra ingredients make.

I normally serve this sauce over a very thin spaghetti but that's a tricky shape to feed a 15 month old. This summer it has appeared over wagon wheel pasta but over the weekend we sampled Costco's asparagus & gruyere cheese stuffed ravioli and it was a heavenly pairing with the lemon and chives. To fill out the meal add some roasted or sauteed shrimp. I'm drooling just typing this. We just had it the other night and I'm thinking it might appear again before Friday comes!

4 tbsp butter
1 good and juicy lemon
4 tbsp grated parmesan cheese
a huge handful of fresh chives, chopped (I just snip them with a scissors!)
¾ box of dried pasta or 2 packages of fresh ravioli

Boil your pasta as directed on the package. Drain and set aside. Melt the 4 tbsp of butter in the pasta pot. Turn off the heat/remove the pot from the burner! This is super important, you don't want to evaporate the lemon juice or overly melt the cheese.

Squeeze the lemon juice into the butter, watch out for the seeds. Swirl the pot to combine. Add the cooked pasta and gently toss to combine. It works best if you do this step in the hot pot you boiled the pasta in because the retained heat of the pot will help things along.

Add the parmesan cheese and gently toss to coat. Move quickly on this step or the cheese will melt and clump up and the pasta will become too thick to toss. Sprinkle heavily with fresh chives, salt and pepper to taste.

Previous Post: « My not so pretty set-up for my super pretty photos
Next Post: "Fresh from the garden veggie salad" from Stef at Livin' the McLife »