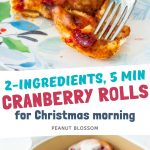 Kids are such funny creatures, aren't they? While my kids won't even think about putting my homemade orange cranberry sauce on their plates at Thanksgiving, they will gobble it right up on Christmas morning when I add the leftovers to these easy cranberry cinnamon rolls.

To keep things simple, I just use a can of Pillsbury cinnamon roll dough.

You could make the cinnamon roll dough from scratch with your bread machine and prep the whole pan for the freezer, but the prepared can of dough works just great!

After all, even busy parents deserve a break on Christmas morning.

Truly, there are just two main ingredients for this easy breakfast recipe:

We prefer the Pillsbury Grands! Cinnamon Rolls because they are larger in size to the classic cinnamon roll recipe.

There are just 5 rolls in each can so if you have a larger family to serve, you may want to double this recipe and prepare it in a 9 x 13-in pan.

Open the can of cinnamon roll dough and lay the log of dough on a cutting board or baking mat.

Carefully unroll the log, keeping the dough as one solid piece. Don't try to separate each roll individually yet.

Use a spoon to spread the cranberry sauce evenly over the dough like this:

Then simply roll the log right back up again and separate the individual cinnamon rolls.

Place them cut side up in a baking pan and bake according to the instructions on the can.

I usually reserve the icing from the canister of cinnamon rolls to use on the warm, baked rolls.

But if you're feeling extra fancy or you want to have LOTS of icing on your rolls, my homemade vanilla glaze would be easy to make.

For a special even like Christmas morning, you may want to serve them alongside my crockpot hot chocolate bar.

You could also garnish the platter with these easy sugared cranberries for a special touch.

The cranberries would taste great in my cranberry orange muffins or you could use the cranberry sauce in my panettone bread pudding, too.