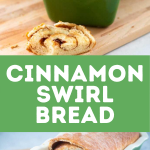 This sweet cinnamon swirl bread is easy enough for a beginner baker. Cut it into slices for the best toast you've ever had, you'll find it tastes just like a warm cinnamon bun with a rich, cinnamon-packed filling.

I have been craving homemade cinnamon buns for MONTHS.

First, there was a run on yeast. Then I couldn't find bread flour to save my life. When I was finally able to refill my pantry, the first recipe I tried wasn't what I had in mind.

I reached out to my friend Melissa who happens to be an amazing home baker and mom of four strapping teenage boys.

I knew I asked the right person for help when her response was: "Cinnamon rolls can be such a pain. You need to bake this cinnamon swirl bread instead! It is so much easier but has all the same flavors."

This bread was so fantastic, I had to pass on the favor and share it with you. Add it to your baking rotation stat and you can thank me later.

How to Make Cinnamon Swirl Bread

Normally, I prefer to make homemade bread in my bread machine. Measure the ingredients, dump in the bowl, done.

You can find my favorite bread machine recipes here.

However, this particular bread recipe requires making the dough in your stand mixer and rolling it out by hand.

But don't let that scare you!

It may have a few more steps than a normal bread machine recipe, but I pinkie swear it was so much easier to do than cinnamon rolls, for sure.

There are three unique ingredients you'll need in your pantry to make this cinnamon swirl bread:

The only thing that made me hesitate with Melissa's recommendation was the declaration that it is absolutely essential to order the Baker's Cinnamon Filling mix from King Arthur Flour.

I'm not generally keen on recipes that have a required hard-to-find ingredient I can't get at my local grocery store, but her rave review of the recipe had me curious.

I ordered the cinnamon filling and gave it a try. I immediately saw why Melissa loves it so. I can add my hearty agreement that it is worth the extra step.

You simply measure out enough of the Baker's Cinnamon Filling Mix and just add water. Stir together the mixture with a fork and you've got instant cinnamon filling that will remind you immediately of a Cinnabon.

You will also need powdered dry milk. I ordered it from King Arthur Flour at the same time as the cinnamon mix but that particular ingredient can be found fairly easily at most grocery stores and is very inexpensive.

Lastly, instant yeast is essential for this recipe. If you've done any bread baking at all, you'll be familiar with this ingredient. If this is your first attempt at bread-baking, you need to choose between buying yeast in packets or a larger quantity of jarred or packaged yeast.

Which Yeast to Use

If this is your first time buying yeast, you'll just need to choose one of these options:

If yeast is still difficult for you to find, just buy whatever instant yeast you can get your hands on. It will all work. I was able to add the SAF Red Instant Yeast to my order at King Arthur. This was a new-to-me brand, so I'm extra glad I also ordered this storage container. Once you open the SAF package, it is nearly impossible to store the yeast properly without some sort of container.

How to Form the Swirl

Good news for beginner bakers: this dough is really easy to work with. It is soft and pliable and super-easy to roll out.

To assemble the swirl bread, you roll out the dough to a large rectangle, spread the cinnamon filling over the top leaving an inch-wide border around the perimeter.

Roll the bread up tightly starting at the narrow end. Place the rolled log of dough in a bread pan and bake.

The loaf popped easily right out of my buttered bread pan. It cuts cleanly into neat slices.

Our family enjoyed it warm from the oven with just a little slather of butter for good measure. The next morning, we toasted it for breakfast and it heated up perfectly.

As much as I love the soft texture of this cinnamon swirl bread, another fun way to make a similar treat is to try my cinnamon pull apart bread.

Rectangles of dough are coated in cinnamon sugar and butter and then baked in a bread pan for crispy edges that you can pull apart:

Could Kids Bake This Cinnamon Bread?

I let my kids help in the kitchen with just about any recipe if they are showing interest.

Of all the yeasted recipes I've made, this bread is one of the easiest. I think it would be a perfect place to start in introducing homemade bread to kids.

They will love to spread the cinnamon mix and roll up the final loaf. It is just hands-on enough to be fun without being too intense with the steps.

The recipe for this bread is featured on the packaging of the cinnamon mix but I tweaked it to add more information for beginner bakers.

For the cinnamon filling:

1 package of King Arthur's Baker's Cinnamon Filling Mix is enough to make 5 loaves of this recipe. Once opened, it should be stored in a cool, dry place or frozen in an airtight container for longer freshness.