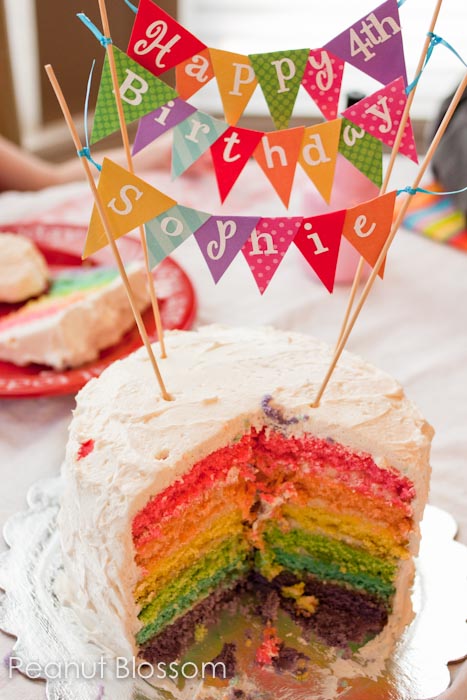 When I was hunting for inspiration for the Peanut’s birthday party, I stumbled across Whisk Kid’s mind-blowing rainbow layer cake that had been featured on Martha Stewart’s show. The picture of the cake sliced open was so amazing to me I just could not get it out of my mind. I chose the rainbow theme purely so we could use this cake recipe.

Now when it comes to experimenting with things in the kitchen, I almost always do better with recipes that are VERY specific. I am so much more a baker than a cook. I followed the recipe for the cake with absolutely no substitutions. (Ok, that’s not completely true, I greased my cake pans with butter instead of vegetable shortening, but I swear that’s the only change.) 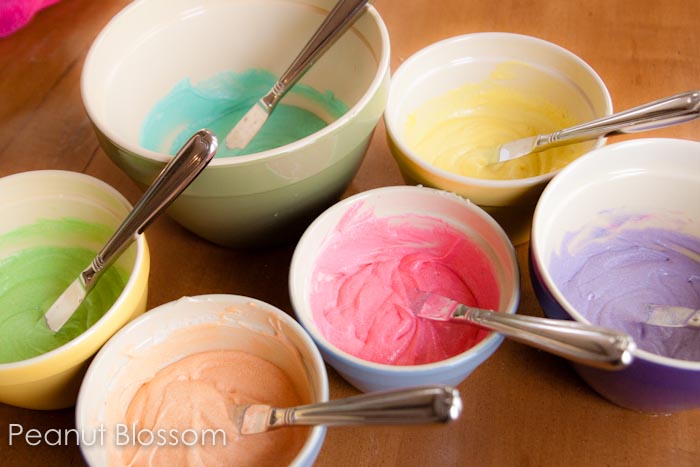 Colored batter in the cake pans ready for baking. 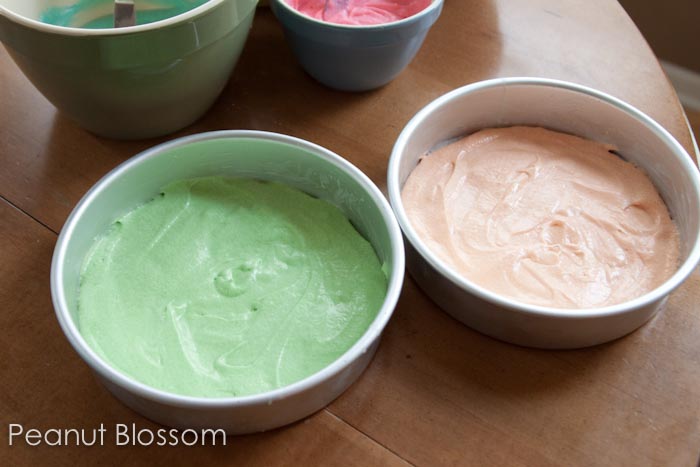 Layers cooling on racks after baking. 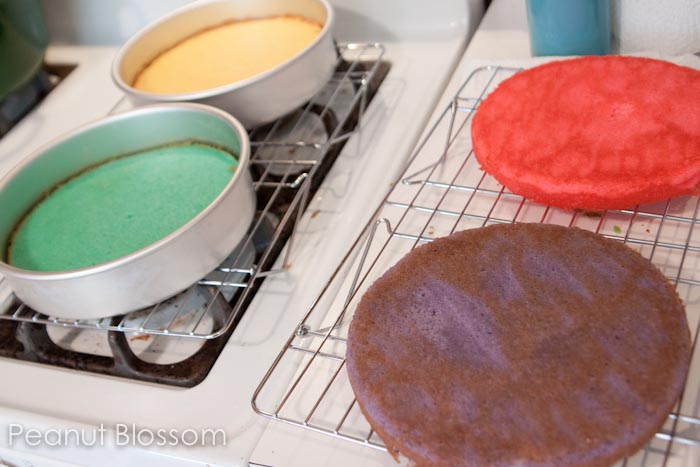 Cake layers assembled with filling. At this point I let the cake sit overnight on my counter with a clean towel over it. I left the second batch of frosting sitting in the bowl of my mixer so it could come to room temperature. In the morning, I beat it for a few seconds and then frosted the top of the cake. 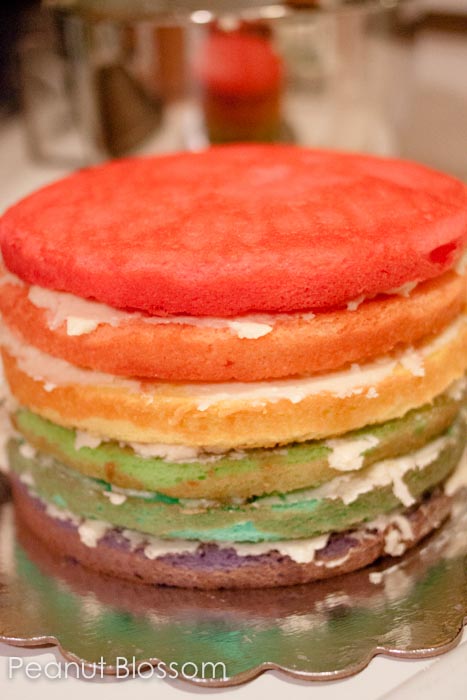 I knew this recipe absolutely required a homemade white frosting but I just wasn’t sure about the lemon frosting mentioned in the cake recipe. Too scared to just leave the lemon extract out, I went hunting for a different white frosting recipe and decided on Annie’s Swiss Meringue Buttercream instead. The ingredients were similar and I appreciated Annie’s additional notes on the recipe. When I first tasted the frosting, my immediate thought was that it is like Cool Whip but more buttery. It is so light and fluffy but substantial enough to frost a cake with. This will definitely be my standard frosting recipe from now on.

I had a baby shower to attend an hour away the day before the Peanut’s birthday bash, so I decided to attempt freezing of the cake layers and frosting so I could simply defrost and assemble the night before. Other than one glitch, it worked like a charm!! So I’ve added my make-ahead tips below which will allow you to have this crazy show stopper of a cake without it consuming your entire pre-party time budget! You can bake the layers one day and make two batches of frosting on two other days. Fit it in however you have time!

How to Bake a Rainbow Layer Cake 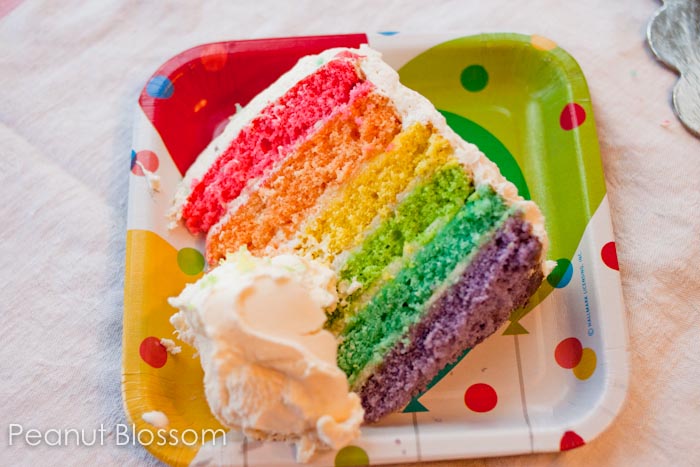 Preheat the oven to 350F degrees. Butter as many cake pans as you have (I have 2 and reused them) and line with a circle of parchment paper. Butter the parchment paper as well. This ensures your layers come out smoothly and is really important for this recipe.

Sift together the flour, baking powder and salt. Set aside.

Cream the sugar and butter, then add the egg whites (I cracked them all into one bowl) and add them a little at a time. Add the vanilla and mix until fully incorporated. Then, alternating between wet and dry, add the milk and flour mixture in two parts.

Divide the batter EVENLY amongst 6 bowls (I did it by measuring it out with my measuring cups. I put 1 cup into each bowl and then I think 1/3 c to divide the remaining batter), and then whisk a fair amount of the appropriate food color into each bowl. Keep in mind that the color of the unbaked batter will be the color of the baked batter. Pour into the pans and bake for 15 minutes each.

When you remove them from the oven, let them rest on the cooling rack, in the pan, for ten minutes. Then flip onto the wire rack to cool completely.

To Freeze:  If freezing your layers, wrap COMPLETELY COOLED individual layers in a double layer of plastic wrap and then in a layer of tin foil. Stack the layers on a cookie sheet and store in your freezer.

To Defrost and Use: I let the cake layers sit on my counter still in their wrappings for about two hours before I attempted to assemble the cake. I could tell they were still slightly frozen in the center, but they had warmed up enough I didn’t have to worry about condensation. Work carefully layer by layer spreading a scant 1 cup of frosting between each layer.

Vanilla Swiss Meringue Buttercream
(Use two batches for the rainbow cake–1 for filling/crumb coat, 1 for frosting over the top and sides. I had leftovers, but better to have too much than not enough.)

With your mixer set with the whisking attachment, beat on medium-high speed until stiff peaks form and the mixture has cooled to room temperature, about 8 minutes. I made two batches of this frosting for the cake. The first one took 6 minutes to get to stiff peak consistency, the second took 2 minutes. Do NOT over whisk! It will look like this, keep an eye on it!

Reduce the speed to medium and add the butter, 2 tablespoons at a time, adding more once each addition has been incorporated. If the frosting looks soupy or curdled, continue to beat on medium-high speed until thick and smooth again, about 3-5 minutes more (Annie’s note: Don‚Äôt worry, it will come together! Tiffany’s note: This didn’t happen to me, just keep an eye on your egg whites and hopefully this won’t happen to you either!) Stir in the vanilla extract and mix just until incorporated.

Keep buttercream at room temperature if using the same day.

To Freeze: Transfer to an airtight container and refrigerate up to 3 days or freeze up to 1 month.

To Defrost: Leave your frosting on the counter for at least 12-14 hours. It needs to be very very solidly at room temperature before you even touch it. I made the mistake of rushing this process and it completely separated out on me and I couldn’t get it back together. I left the second batch out overnight and it was absolutely perfect. Beat with paddle attachment on low speed until smooth again. It only took a minute or less for me. DO NOT over beat!!

Store your finished cake at room temperature for the party and then up to 3 days in the fridge afterwards.

Rainbow party for my 4 year old girl
Next Post: Denial ain’t just a river in Egypt »