I know I'm not the only one who has decked her halls for Christmas. Thanksgiving is under our belts, it's onwards to the next big prep season but I'm loving every minute of it.

One of the more special moments from this last weekend was the arrival of Eddie our holiday elf. The Peanut was so worried that Eddie wouldn't find us because of our move and we've been convincing her for months and months that things would be just fine. The joy upon discovering his arrival on Saturday was beyond priceless!

Our Eddie tends to just sit on a shelf (or a lamp, or a cabinet, or a tv. . .) but I love the super moms who are out there arranging more festive adventures for their family elves. My friend Carey not only manages awesome elfen fun but manages to capture amazing images of them every day. I've asked her for some tips of inspiration this month and she has graciously agreed to share. I hope you enjoy her posts as much as I do!

Does your family have an elf?  What kind of fun does he get into? 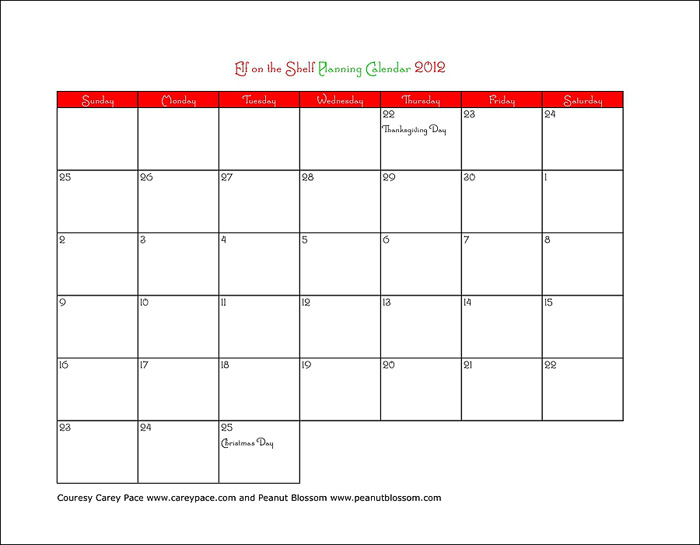 What is that phrase about planning? Failing to plan is planning to fail? I’ve found that to be the key to my successful Elf on the Shelf execution. Here’s my Elf Story.

Christmas 2009 was our first year. My kids were 3 and 1.5 and didn’t really get it, at all. There were many times I forgot to move Jolly that year, but it didn’t matter. I was saved by my kids’ obliviousness. Christmas 2010 was better, when they were 2.5 and 4, for my oldest was finally old enough to understand and look for him. We had a good time that year, but there were still some times I forgot to move Jolly, and times I had to scramble to come up with ideas. These were the days BP – before Pinterest.

Pinterest happened to me (did it happen to you, too?), and I could not wait for Christmas 2011 to come so I could implement all the awesome ideas I’d pinned. I also wanted to photograph all of Jolly’s adventures, as a personal photography project. After a few days into the season, however, I realized I needed a plan. And that, my dear readers, made all the difference.

Here are my tips for a successful Elf Season. 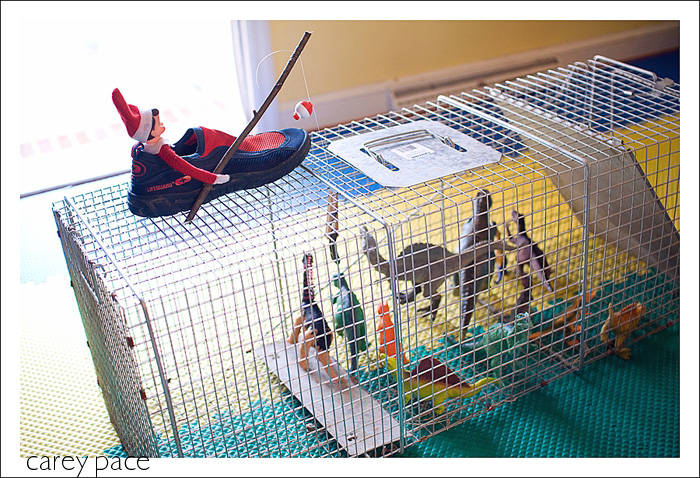 (above: Jolly trapped the toy dinosaurs in our for real animal trap)

PLAN:  I printed a blank December calendar page and planned out the entire Elf Season. I made a list of all the ideas I truly wanted to do that year. I starred my simply MUST DO ones and looked at our family calendar. I spread them out and put them on days when I’d have time to do it, after the kids went to bed. I planned an idea for every single day of Elf Season.  I had my game plan all ready and it truly helped me accomplish quite the amazing Elf Christmas Season 2011. I didn’t run out of days to do my favorite ideas. I didn’t forget to move him and the kids find him in the same spot on day two. And I wasn’t staying up until midnight trying to finish the scenes. I’d already planned ahead, knew what I needed to do upon kid-bedtime, and was ready to act. Although it was my most intense Elf year, it was the least stressful for me!

Two other things I learned last year. REMINDER:  First, set an alarm or reminder on your cell phone to go off at 9pm or some time you can be sure is after your kids are in bed, to remind you to move your Elf, just in case you get wrapped up in something and forget.  Or perhaps enlist the help of an Elf Buddy, who will call you and ask "Delta 24, this is Apollo 32.  Can you confirm the position of ShelfElf 101?" 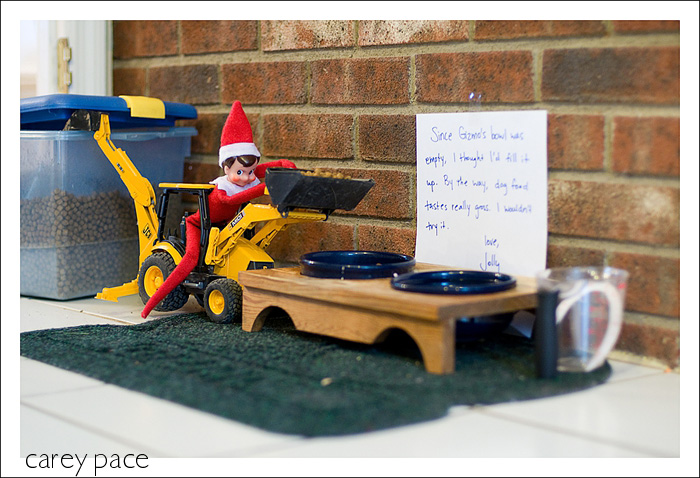 (above: Jolly used the Bruder Backhoe to deliver the dog food)

SPOUSE:  Second, get your spouse involved. My husband wanted to be involved in Jolly and his antics. But when I sat down and made my game plan without him, it left him no room to participate. I hadn't even considered he'd want to be part.  So, ask your spouse. Get him involved, too. Make it a family affair.  And even better, he'll be there to bail you out when something unexpected happens and you either forgot to Elf that night, or don't have time, or don't have the mental energy left to write a note.

I created a one page printable calendar page that includes the days in November and December that are Elf possible. Feel free to use this for your Elf Game Plan!

Carey Pace is a Lifestyle Photographer  and Stay and Home Mom in Kingsport, Tennessee who loves to write and capture the magic of childhood with her camera.  You can find her at www.careypace.com and on Facebook at Images by Carey Pace.