Oh my sweet Little Pea. How . . . “interesting” you made our first trip to Disney.

Little Pea was just 2 weeks shy of her 2nd birthday during our vacation to Disney World last year. We knew we were  pushing it by taking a child that young but we really wanted the Peanut to experience Magic Kindgom and leaving Little Pea home just would not have felt right. So we took our chances.

Oh how much she taught us that week. Learn from our mistakes.

If we had it to do over, I would still have gone with a toddler at Disney but it could have been so much easier. I hope these toddler survival tips help save you a little heart ache. 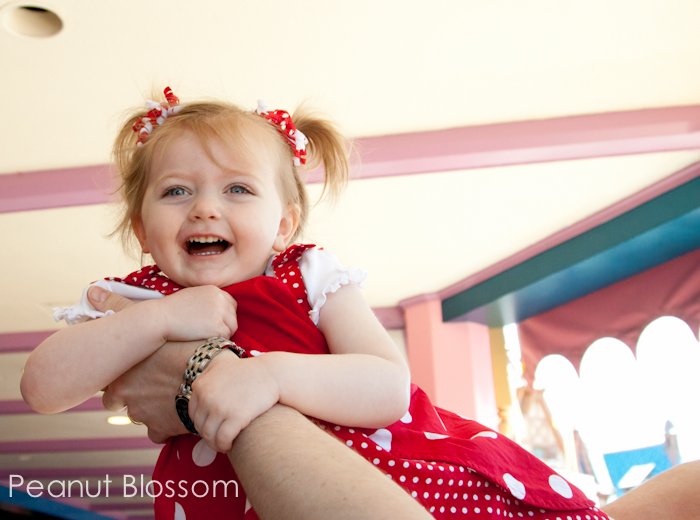 5 tips for taking a toddler to Disney World:

1. Get up early and take advantage of golden mornings:

Handyman Tim groaned when I told him our brutal schedule for “vacation”:

Life with a toddler is at it’s most perfect from the hours of 8 am to 11 am.
Anything beyond that is dicey at best.

The best chance we had of enjoying any time at all with Little Pea in the parks was to arrive early enough to be one of the first through the gates, see what we could by 11, and then Get Out of Dodge before we landed in Meltdown City!

Meltdowns reach a peak just before lunchtime and Little Pea was still very much on her afternoon nap schedule. We toured the parks in the morning and found lunch on our way out towards the car. We did our best to keep her awake during the ride back to the hotel and then let her nap in the afternoons.

If we had slept in to normal vacation hours of 8 or 9 a.m. there is no way we’d have hit the parks until at least noon–just as the crowds are getting nuts and the heat of the day is peaking. Neither of those conditions are good for a toddler.

I know it sounds crazy to arrive at the parks so early but each and every morning we were astounded by just how long it takes to get from the parking entrance to the actual park entrance. Parking queues, shuttle trains, bridges to cross, it was nuts. Disney has it down to a science but it still takes time to get from Point A to Point B.

The good news is that after our fairly rushed and action-packed mornings, we’d have lazy loungey afternoons and a fairly easy dinner and evening stroll before bed. 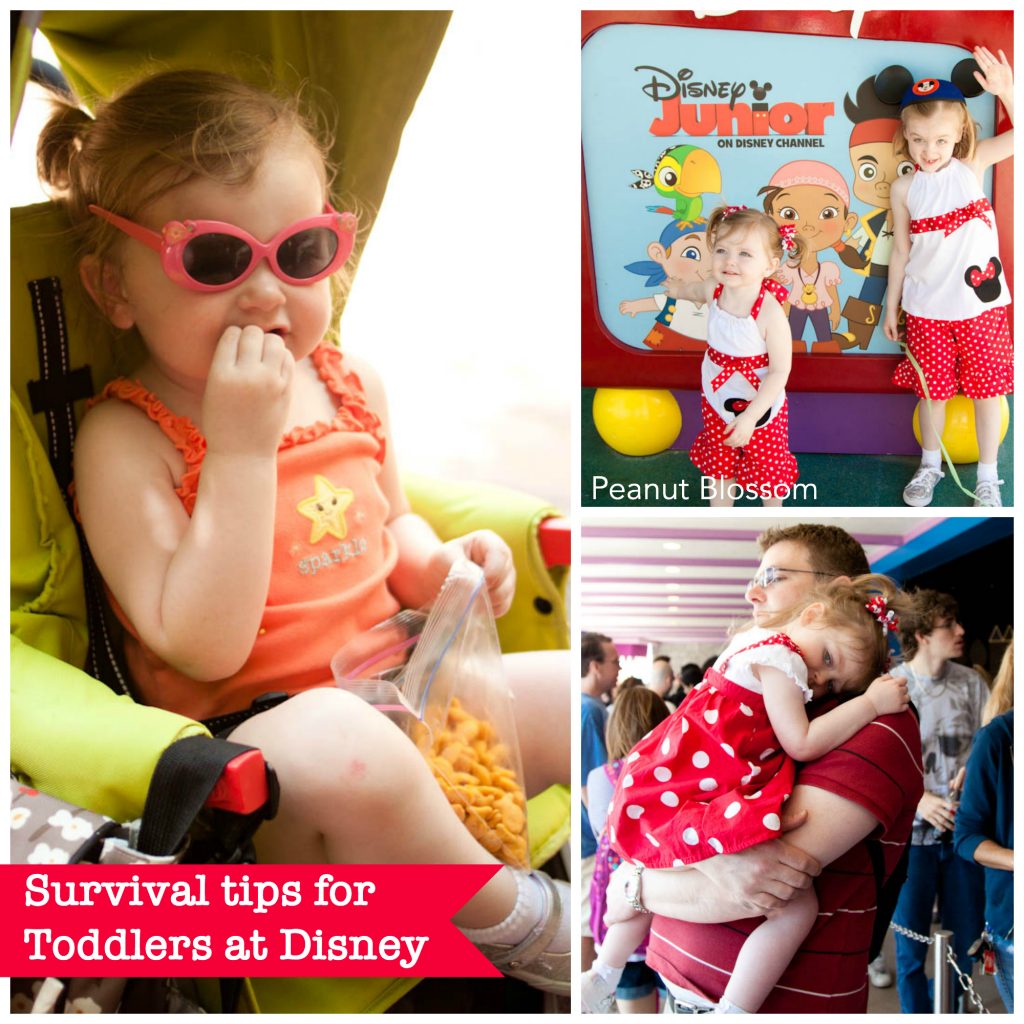 This is a rule we developed after a miserable start to Day 1 of our vacation. It is important enough to deserve it’s very own post. You can see the full explanation here. Know your One Thing and go to it First. Anything else you get to see that day? Total bonus points and extra frosting on that cake.

Last year we made the mistake of letting the guide books tell us which things were the coolest to see. The books were totally right about the content of the attractions but what they didn’t know was that Little Pea had ZERO tolerance for waiting patiently in a seat for a show to begin.

If we could go back and change one thing we would have SKIPPED every single sit-down show we tried to see:

Those were all great break activities for the rest of us but they turned into torture exercises for Little Pea who was usually SCREAMING to be let down and run before the end of each show.

The one show she did thoroughly enjoy? Disney Jr LIVE! at Hollywood Studios. The wait was practically non-existent and we were able to get a seat on the floor off to the side where she could stand up and wiggle to her heart’s content.

Know what triggers your own toddler and avoid it despite what comes recommended to you by the experts. We brought many of our own snacks with us into the park. They were all neatly packed into the diaper bag in the morning. What we forgot each and every single day?! The diaper bag stayed with the stroller that was often parked in the stroller lots!

Had I had my full wits about me, we would have packed the snacks into Tim’s backpack before leaving the stroller. I’m quite certain that would have improved Little Pea’s mood. The snacks come in most handy while waiting in line, not while being pushed around in the stroller.

Since we had flown to Florida, we did not have an excess amount of sippy cups. We found ourselves on Day 1 without a sippy cup for Little Pea and she was still too little to drink well out of a normal water bottle.

Tim discovered that the straws available at the concession stands fit perfectly inside our water bottles. We’d let Little Pea sip from it and then drop it into the bottle and twist on the cap. When she wanted to drink again, we just pulled the straw out of the bottle for her. At some point Tim grabbed a bunch of those straws to keep in the diaper bag in case they got gross or chewed up. 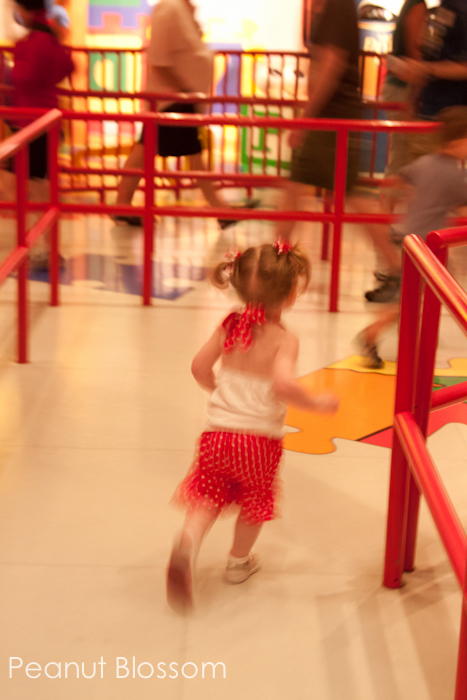 My last tip is make sure to allow plenty of leg-stretching time for your little one. Little Pea was in a running phase and it was sheer torture to be out in public and not be allowed to explore. We were terrified of losing her because she is a Lightening Fast runner but some of the ride queues were just perfect for letting her run in a penned in area. See the toddler blur of her running through the Toy Story Mania queue? That might have been our very favorite ride with her for this reason alone.

A word of caution: Little Pea was so excited to run up and down those aisles that she didn’t stop to figure out to go under the bars. If you think your kid would be tempted to do that, maybe think twice before allowing it.

But, for us? It worked great right at the beginning of the day when the queue was just beginning to fill and she was bursting with that fresh day energy. We found letting her run off some steam right away while the parks were less crowded and crazy allowed for a more mellow Little Pea later in the morning.

Did you enjoy these tips? Looking for more great advice on planning a Disney Vacation? Check out the rest of my Disney Guide here!

It snows in the south!
Next Post: What to wear to Disney